Admins shouldn’t use the move/fmove commands for moving players. Why? This disturbs the work of our balancer.

Our server rules are listed at e4gl.com/rules.

New admins are “third tier admins”. Upgrades will be given after a certain time and if there are no complaints.

The admin control panel allows admins to read the chatlog, check players and to administrate our BF servers over the web.

It is possible to issue all commands in-game and in any channel on our discord. The most important commands are described at the end of this article. A full command reference is available here.

Anywhere a reason or message is needed, a preMessage ID can be used instead.

If a player creates a report with !report or !admin, all in-game admins are notified. Reports are logged in the database with full player names for reporter/target and the full reason for reporting.

How to view reports 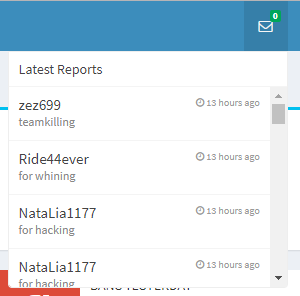 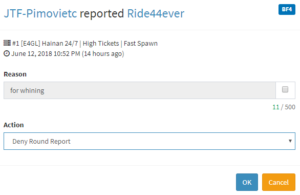 How to act on reports

Accept and deny are used for confirming or denying reports.

Admins can add players to the watchlist. Players on this list trigger a discord notification each time they join one of our servers. 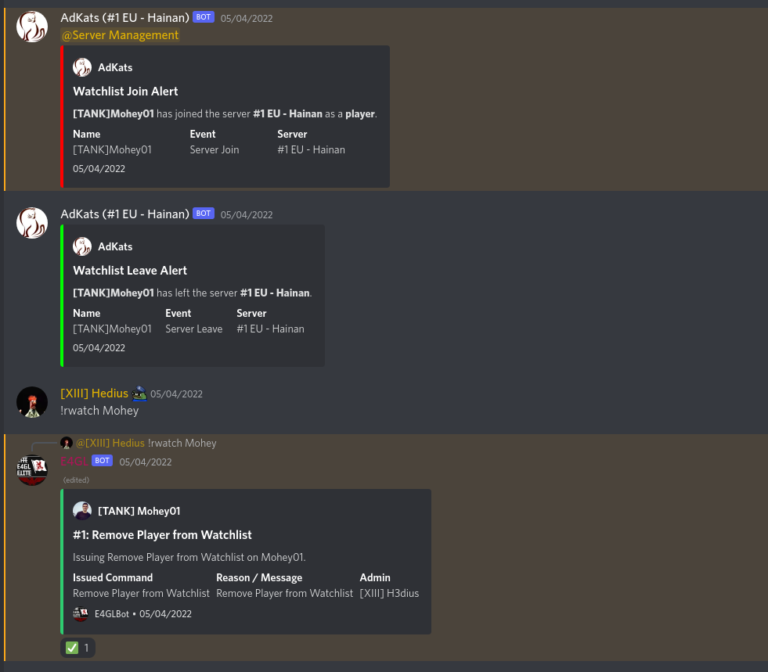 Reputation is a numeric for how helpful a player is to the server. The more they help admins by reporting rule breakers, moreso from spectator, assisting the weak team, or populating the server, the more their reputation increases. Committing infractions, breaking server rules, getting banned, etc, reduces their server reputation.

Reputation starts at zero and moves toward -1000 or 1000 so it’s easy to get/lose rep early on but harder near the top/bottom. Players will never reach -1000 or 1000 reputation, but can get close with a lot of effort. Each command a player issues and every command issued against them has a reputation amount; Some good, some bad. Every time a player’s reputation changes you are notified of the change in chat.

The following are ways reputation can be gained:

We have an automated punishing system which acts based on our punishment hierarchy for rule breaking. Please use this system.

After a player is punished, their total infraction points are calculated using this very basic formula: (Punishment Points – Forgiveness Points) = Total Points
Then an action is decided using Total Points from the punishment hierarchy. Punishments should get harsher as the player gets more points. A player cannot be punished more than once every 20 seconds; this prevents multiple admins from accidentally punishing a player multiple times for the same infraction.

Violations and How to Act on them (Command Order)

Do not use punish several times for one rule violation. One punish per violation. Always warn before a punish with /warn.

Manually issue a kill if a player does not react to the warning.

Please use /punish or the command order for punishing rule breaking. Punish should be preferred because it always performs the correct action!

When a player is seen base-camping, tell them to move out of their base via chat and the /warn command. If they fail to comply, kill them.
If they decide to to continue despite all previous measures, punish them.

If a player is griefing their team(mates) by, for example, placing explosives on any of the teams vehicles, warn and kill them. Punish them if they continue.

Use /punish directly without a warning if a player steals a vehicle from the enemy. Warn players if they steal a vehicle from a teammate and then punish them.

If player is online give them a warning, if not follow below punish list for each occurance

Minor toxicity should be ignored. One or two insults do not require admin attention. However, if the player continues or grows in aggression, so that other players start voicing (more) complaints, you should mute the offender using the round /mute command. A warning prior to the mute is appreciated, either by a simple message in the chat or the /warn command. Furthermore, you can use the /tmute or /pmute commands for issuing mutes over longer timespans. This should be done especially for consistent insulting and racism.

Dealing with racism and the standard level of toxicity found in a game like BF4 requires differentiated handling. Like stated above, minor toxicity should only ever be punished by muting the offender. Again, a warning prior to the mute is appreciated. However, when dealing people using racist slurs, you should primarily let the language enforcer do the work. Only when a racist is intentionally circumventing the language enforcer, you are to /punish them. That said, we do not ban for racism. However, we suggest that you issue /pmute on those violators.

Did you catch a player abusing any type of glitch or bug, like the Elevator Glitch on Hainan, punish them by kicking or killing them depending on the severity.
You may use the /tban command on them if they keep abusing bugs.

A player is to be permanently banned if he voices threats against the server, such as DDoS Attacks.

When coming across a player using an emblem resembling 1488, 88, Black Sun, Sigrune or Swastika, they have to be banned.

We also want to point out that common sense should always be applied whenever dealing with people breaking the rules.
Always try to talk to the players you are dealing with before making a decision. It can help more than directly kicking or killing someone.
In the case of uncertainty in the handling of not specified situations, don’t wait and hesitate to talk to us. We are here to help each other, of course.

It can happen that you might be missing crucial evidence required to make a justified decision. You might have to give the accused person the benefit of the doubt. That’s also why video evidence is the best type of evidence.

Does your admin level not grant you access to commands like /tban, you’ll find success in contacting another admin with a higher admin level.

Players can be muted using the mute command. Muting lasts until the end of the round. Players who talk in chat after being muted will be killed each time they talk (up through 5 chat messages). On the 6th chat message they are kicked from the server. A player coming back during the same round is kicked again on their first chat message.

Furthermore, it is possible to temp (/tmute) and perma (/pmute) players:

Critical Commands (Think before using them)

Are you sure you want to delete team?

This website uses cookies to improve your experience while you navigate through the website. Out of these cookies, the cookies that are categorized as necessary are stored on your browser as they are essential for the working of basic functionalities of the website. We also use third-party cookies that help us analyze and understand how you use this website. These cookies will be stored in your browser only with your consent. You also have the option to opt-out of these cookies. But opting out of some of these cookies may have an effect on your browsing experience.
Necessary Always Enabled
Necessary cookies are absolutely essential for the website to function properly. This category only includes cookies that ensures basic functionalities and security features of the website.
Non-necessary
Any cookies that may not be particularly necessary for the website to function and is used specifically to collect user personal data via analytics, ads, other embedded contents are termed as non-necessary cookies. It is mandatory to procure user consent prior to running these cookies on your website.
SAVE & ACCEPT